How I’m Tackling Weight Loss and Food Addiction in Recovery

I rarely do trigger warnings (mainly because my entire blog is probably one big trigger), but this post will deal specifically with weight, eating disorders, etc. Heads up if you’re particularly sensitive to that or struggle with it. Also, I am not a medical professional and none of this should be seen as medical advice. This is just my experience. ♥

When I first got sober, I started gaining weight. It seemed to be a cruel joke. For various reasons, I was at my thinnest while I drank. I ate terribly, was probably horribly malnourished, but I could fit into a size 8 so…woo!

When I cut out alcohol, I pretty quickly dove into sweets with a vengeance.

There’s a season for everything, and all that jazz. But I gained a few pounds, and felt uncomfortable, so I worked on losing the weight. For about 6 months in that first year of sobriety, I was very dedicated to the gym. Not so much clean eating, mostly just exercise, but the exercise helped me to choose healthier food to fuel my body.

It worked well enough. I lost the 20 or so pounds that I’d put on, and I felt like superwoman.

8 or so months sober – woot

But life kept happening. You know how life does that? Why does it do that? Not that I want it to stop happening, mind you. No thanks. But still.

Sticking with something for a consistent period of time is, erm, let’s just say I wouldn’t mark it down as a skill on my resume or anything.

I’m really good at jumping into projects and skills and interests with both feet, learning everything I possibly can about it, getting as good as I can get while my attention span cooperates, and then fizzling out. I mean, if there were medals for this, I would get the gold every time.

Except sobriety, so far. This is the first thing I’ve purposefully done (or..not done?) consistently. It feels good.

When life got a bit too chaotic and I lost my routine, I started gaining the weight back.

It came back fairly slowly at first. Eventually, I started losing and gained the same 10 pounds for months at a time, never really trying for more than a few weeks.

This past May, I was at my highest weight ever. That includes my three full-term pregnancies. I felt awful. Depressed, miserable, you know the drill. Food had become a problem in the way that alcohol had been a problem. I was hoarding sweets, hiding chocolate bars in my closet, throwing away tons of candy wrappers from my truck on the way home and then acting like the one I did bring inside was the only one I’d had that day.

Seriously. I’m a basket case, guys. I was doing the same thing with food that I’d done with liquor! Pre-gaming so nobody knew how much I was really eating, hoarding, sneaking, so insane. This isn’t new to me, it’s just been quite a few years since I showed those kinds of behaviors with food.

It’s a familiar story: food addiction. Or really, addiction in general. I’ve fixated on food, sex, work, alcohol, and a lot of other things in the past, and food is probably next to alcohol as my most difficult addiction to break. 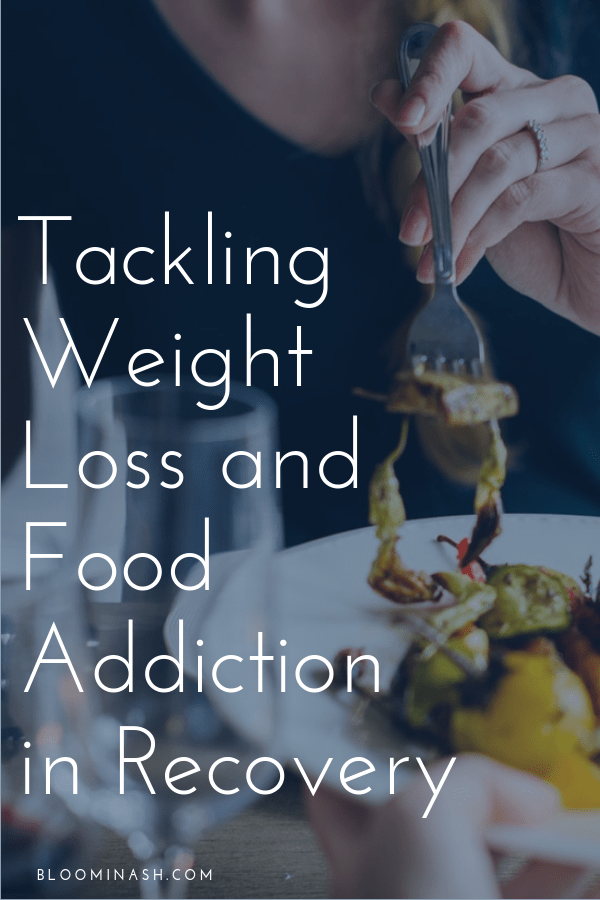 Maintaining a balanced relationship with food and fitness sometimes feels as impossible as trying to drink in moderation.

You have to keep eating, you know? You can stop drinking by just refusing to drink the first drink (as a start), but you can’t just stop eating. I know, I tried. My parents have the therapy bills to prove it. Like many others who struggle with addiction, an eating disorder is also part of my story. Starving, binge-eating, purging, the whole deal. Mostly though, I haven’t fallen back into that black hole since I was a teenager. I turned to alcohol instead. Aaaand…here we are.

It IS possible to find a decent balance, but it takes a lot of work. Yet again, I had to run smack into the reality that life doesn’t just give me what I want without making me work for it. Thaaaaanks.

I’ve learned that “one day at a time” works for more than just sobriety.

I’m not writing this as some kind of guru who figured it all out. Over the past few months, I’ve lost about 20 pounds (out of 40 that I hope to eventually lose), but I still have my good and bad days.

I look at this like I look at my alcoholism, though: one day at a time. Today, I’ll do my best to make good choices, and lean on God and others for support when I need it. Tomorrow can worry about itself.

It sounds trite to me as I write it, but there really isn’t a magic formula for weight loss and health. Life changes are made up of small habits and decisions, piled up on top of each other over time.

Here are some of my personal tips for healthier eating:

1. Write down what you eat.

I know, this is like the oldest trick in the book. And considering my past eating disorder struggles, this is something I tended to resist the most. It helped me for a while to only write down what I ate, no calories or any other information attached to it. No numbers.

The simple habit of writing it down (or typing out in a Notes or Evernote app) keeps me on track pretty well. Now, I use MyFitnessPal, and tracking calories hasn’t triggered any kind of ED relapse for me. I can get a little controlling, but it also helps me to make sure I eat enough. Tracking them helps me make sure I stay in a healthy calorie range on both sides of the extreme.

Again, I know this one does not work for a lot of people. It does for me, at least so far, but that’s all I know.

2. Take things one meal at a time.

If it’s lunch, and I’m craving my usual burger with large fries and a chocolate chip cookie (side note, Wendy’s has the BEST chocolate chip cookies ever omg), I focus on just one meal. If I start thinking things like, “Well, I’ll eat a healthier dinner to make up for this,” or whatever, I’ve already gone off track. Instead, just one meal at a time, make better choices. Your habits will start to change.

Instagram will have you thinking that you have to be a superstar “meal prepper” in order to successfully eat healthy. You don’t need a billion little containers and perfect lighting to plan ahead, though. Personally, this is the habit I fail at more than just about any other, but I keep trying.

Planning ahead can be as simple or as complex as you need it to be. In my life, this looks like making sure I get to the grocery store on a regular basis with an actual list and an actual plan for those groceries. I tend to put it off forever, or just stop in randomly for milk and things, without any real plan. That’s a recipe for fast food and junk.

Keep it simple with your planning if you’re just starting out. It can get very overwhelming if you try to schedule every single meal and snack right out of the gate. I cook maybe 2 meals in advance, and they are super simple (usually some taco meat I can warm up, or a pot roast in a crockpot). Everything else is just ready to grab like apples, cheese sticks, etc. It works for me.

4. Keep your goals quiet for a little while.

This one seems counter-productive and some of you may disagree with me here. That’s ok. I mean, shouldn’t we shout our goals from the rooftops, for the extra accountability? I used to think so, until it didn’t work, and I got tired of it. Science backs me up on this, too. There are studies that say that sharing your goals before you’ve started on them can actually do the opposite of what you expect: it can cause you to completely lose the motivation to continue.

This isn’t the same for everybody, but it’s worth experimenting. I do know that it’s true for me. There’s something very satisfying about sharing my goals when I’ve already accomplished the beginning phases (hit 2 miles on my run, lost 10 pounds, whatever). Now, I do my best to keep my goals to myself until I have something real to talk about.

5. Give yourself grace, and listen to what you really want.

Some days will be tough, and this doesn’t have to be perfect. I don’t eat perfectly, or track my food every single day. Chocolate chip cookies are still my favorite go-to treat, and there just isn’t any point in getting hung up on the scale too much.

I cut out extra sugar for a month, and I’m glad I did. It helped me break those compulsive, addictive behaviors surrounding treats. But now, I’m not as strict about it. Sometimes I think I probably should be, but I’m doing much better than I was. The point is, I give myself grace. Not fake grace, where I eat nothing but chocolate all day and call it “self care”, but real grace. The kind of grace that lets me eat just about whatever I want, as long as it’s something I really want to enjoy for its own sake. Not something I’m using to as an emotional band-aid.

I had to take a month away from sugar so I could hear that voice better, the voice that says that I’m actually lonely, or angry, or sad, or stressed, or tired. It’s important to deal with those emotions directly, not stuff them down with more junk.

And that’s really it, in a nutshell: pay attention to what you really want.

It’s hard, but it’s worth it. All of the “weight loss tips” in the world won’t help at all if you haven’t yet learned how to identify certain emotions that lead you into binge-eating and self destructive behaviors. I hope some of this helped, though! Feel free to share your experiences or any other tips you might have in the comments. ♥

I Ate a Salad, Have I Lost Weight Yet?

When Comparison to Yourself is the Thief of Joy

!
!
Count me in!
Something went wrong. Please check your entries and try again.
Posted in Health, Physical Health