A Woman of Extremes

“This is the first time that I felt even mildly confident that I could quit, the first time in a long time that I truly feel I’ve just had enough. I’m just done. Any other promises to quit were met with screaming voices in my head. Now, I just want to be done.

I am so tired of living my life around alcohol, even when I’m not drinking every day.

The anticipation of the night out, the buildup, the blowout, the hangover. Or, if something happens and we can’t go out (Jay doesn’t feel like it, one of us is sick, etc), the pouting, sulkiness, disappointment, etc. Even drinking 1-2 times a week (again sometimes more, but always at least that) controls me to that degree, and that is a serious issue with me.

I have an addictive personality, apparently. I know that about myself, and have always tried to steer those addictions into healthier outlets (fitness, nutrition, parenting, cooking, etc), but this one has taken hold to a destructive degree, and I think that’s also due to the physically addictive nature of alcohol.

I used to be able to put it down after I got a little tipsy. Now, I drink more and more and more. I can’t live like that anymore. I haven’t journaled about it like I wish I had, I think out of shame but also just not wanting to address it yet. Not being ready. I feel ready now. No “rock bottom”, but just enough small things adding up over the recent months that have pushed me to my point. I’m tired. I’ve had enough. I want to be in control of myself, not be controlled by a substance, or an addiction to that substance.”

I’ve been reading Brandon Sanderson’s Stormlight Archive, and it is fantastic. One of the main characters says this in the first book:

“I’m a man of extremes, Navani. I discovered that when I was a youth. I’ve learned, repeatedly, that the only way to control those extremes was to dedicate my life to something. First it was Gavilar. Now it’s the codes and the teachings of Nohadon. They’re the means by which I bind myself. Like the enclosure of a fire, meant to contain and control it.

I’m a weak man, Navani. I really am. If I give myself a few feet of leeway, I burst through all of my prohibitions. The momentum of following the codes these years after Gavial’s death is what keeps me strong. If I let a few cracks into that armor, I might return to the man I once was. A man I never want to be again.“  – from The Way of Kings, by Brandon Sanderson

This quote jumped out at me when I was listening to the audiobook, so much that I had to pull over and write it down.

Moderation doesn’t work for me, and life works better when I accept that rather than work against it. Not just moderation with drinking, but in just about anything.

I am a woman of extremes. 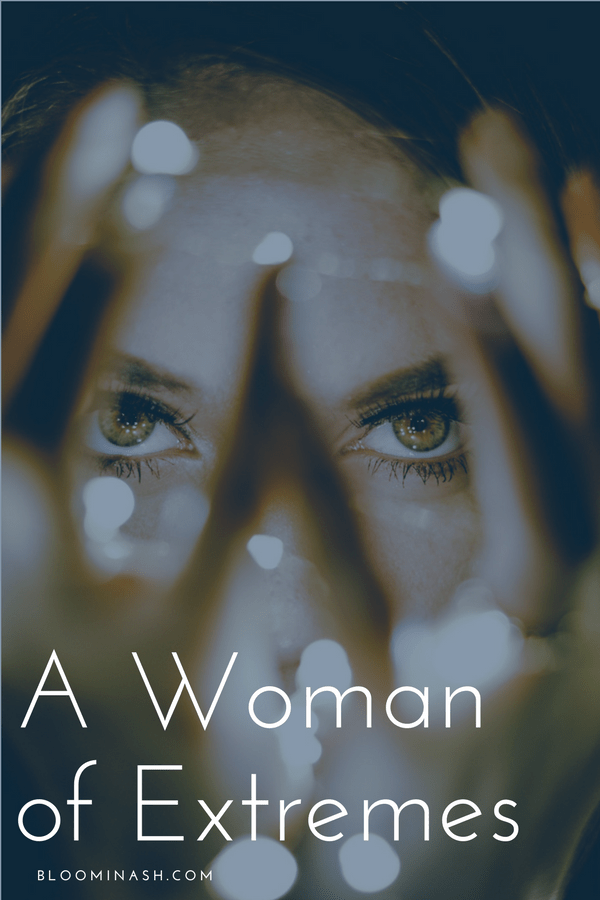 Give me an inch, and I’ll take a mile. This works both for and against me. The trick, I think, is to us it for good more than bad. Sure, picking one addiction after another isn’t a very appealing long-term strategy, but it is a start.

I don’t drink, because it’s easier to say no to the first drink than it is to the second. That’s it. That’s all there is to it.

Food is my unfortunate secondary addiction. Food is a little more difficult to manage than alcohol, in itsown way. I can’t just not eat, although Lord knows I’ve tried that a few times. This is one that I do have to learn how to manage, rather than cut out completely. Instant gratification via sugar and carbs has a hold over me that sometimes reminds me of my alcohol addiction. Mindless eating, mindless drives through fast food restaurants. I hate it, but I struggle.

This is where, for me at least, the 12 steps really shine. They are steps to freedom from all kind of addiction. I’ve parked myself on step 4 for a long, long time. When I first got sober, I went through the steps with my first sponsor, but I didn’t do this step thoroughly. A year later (last year), I started again with a new sponsor. I balked halfway through, and I’ve been stuck for a year now. I do not recommend this at all, by the way. While I haven’t picked up a drink, I haven’t been as free as I could be, and there have been several close calls. It’s unnecessary.

I can exercise every day, eat clean, and do all sorts of other “healthy activities”, but still be eaten up with resentment and fear.

At some of the sickest points in my life, I was still working out consistently and eating healthy. The sickness was in my heart, and my mind. It’s still lurking there. I have to feed the positive and starve the negative. That takes work, and I’m finally getting back into it.

I’m not through all the steps yet, and I’ll never presume to have all the answers. Today though, I did my 4th step, and have plans to move through the others soon.

I wish I could offer more solid advice sometimes, but I remind myself that “advice” isn’t why I write. I write my way through my own recovery in all its forms. That takes time. It takes trial and error. I haven’t relapsed. Not with alcohol, anyway. But make no mistake – I have certainly “relapsed” into unhealthy thinking patterns, eating patterns, escapism in the forms of sugar, social media, relationships, all sorts of things. I don’t beat myself up for this. It’s life. The important thing is that I keep moving forward.

I write to keep moving forward.

Not perfectly. Sometimes, I’m stuck. Usually that’s when I’m hardly writing at all. The more I write, the more it feels like I’m sifting through the mud and finding solid ground again.

It’s enough for today, and today is all I have.

Getting Sober: My First 30 Days

Dear Self: Read This When You Want a Drink

!
!
Count me in!
Something went wrong. Please check your entries and try again.
Posted in Early Sobriety, Recovery